Cities in the area 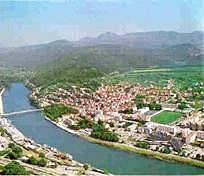 Metkovic is a commercial town with a river port. The Neretva River is navigable to this point. The town became a border town against The Ottoman Empire when the Venetians held the area. It developed from the 1600s under the Venetians. Then the French was followed by Austria, and today it is a border town to Bosnia-Hercegovina.

The core of the old town is on the left bank of Neretva and consists of stone houses build in the Mediterranean style along narrow streets. Metkovic has been an important economic centre for the region since the railway to Sarajevo opened in 1885.

Metkovic is a nice town for shopping and for experiencing everyday life of Croatia. There are many small specialized shops and a couple of shopping malls. There are more cafes than you can count and the street along the football field is completely dedicated to drinking coffee. Down by the river there is a permanent market where the local farmers are selling vegetables of the season and where you can also find stalls with clothes, leather and toys.

The museum in Metkovic has one of the largest ornithological collections in Europe. This Collection was founded in 1952 and represents 350 examples of 236 kinds of birds, which throughout most of the year live near Hutovo Blato and the Neretva Delta.

Every year in August there is a fantastic race (Marathon) with traditional boats (ladas) from Metkovic to Ploce where the citizens of the area revive the skills they needed in the old days when many of them were pirates. The race is joined by teams of Croats from all over the world. It is a must-see if you are in the area in August. 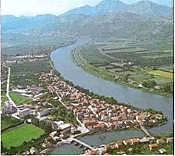 Opuzen is a small cozy town and a very old settlement. It spreads out along the banks of Mala Neretva (small Neretva). The town was the centre and first in importance during the Venetian rule. It lost its importance to Metkovic during the 1800s and after the construction of Napoleon's Road.

It is a nice place to rest with a beer or a coffee by the river bank or go and sit in the town hall square where the church at one end faces modern times at the other end in the shape of the delta headquarter for Privredna Banka. Notice how the painting of the windows in the old stone houses are true to the Dubrovnik tradition and kept in the "Dalmatian green" colour. Every year on 26th of July there is a music festival called "The Melodies of the Croatian South" 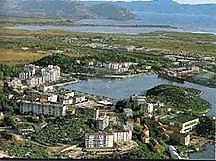 Ploce is an industrial town with a big port and the end station for the railway from Sarajevo. Ploce has changed names a couple of times so you may find books and maps referring to it as Kardeljevo.
The town and its port were very important during the communist time where the town also had a large military garrison.

The harbor has been in use at least since the Venetians who called it Porto Tolero. It is an important harbor for Bosnia as much of its trade goes by the railway and Ploce Harbor.

The centre of town by the church is quite nice with many small shops and a department store. Have a cup of coffee while watching the busy life in the harbor and in the marina.

The ferry to Peljesac leaves from Ploce. Check the schedule here: http://www.jadrolinija.hr/

This is the only town in Hercegovina with access to the sea.

Neum has several shopping opportunities (cheap tax and relaxed copyright laws). There are shops along the coastal main road, but try also to turn uphill at the T-junction, and you will find more shops here.

At the main road, there are several restaurants that are open all year. We cannot really recommend any of them for anything but a cup of coffee. If you take the road to the right you will come down to the beach. On this road, you can find two nice restaurants on your right. Humska Kucha and Bonaca. They have good service and good value for money. Further along the main road towards Dubrovnik there is also a good restaurant in the shopping center called Karaka.

During the season (July and August) the beaches are very crowded and there is a lively activity with cafes and all sorts of tourist activities.

At the big T junction where the coastal road is joined by the road from Bosnia, there are good bargains in CD, DVD and computer games (if you do not mind illegal copies). The shop is down some stairs in the basement of the house. 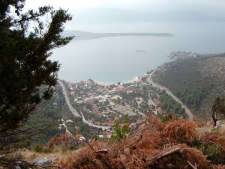 The Dubrovnik Republic relinquished the region of Klek and Neum to the Turks in the war between the Holy League and the Ottoman Empire (second half of the 17th c.) as an exit to the sea and a protection corridor between the territories held by Dubrovnik and the Venetian territories (in Dalmatia). The Turks used the bay for military purposes for the last time while withdrawing after the entering of Austria into Bosnia and Herzegovina in 1878.

Klek is a small tourist town developed during the communist time as a place where workers could be rewarded with a vacation in a small house. Klek has shops, coffee bars and restaurants and a good beach. The small houses has been divided and sold off to private companies which now rent them to tourists. Some facilities are a bit worn down, but still a very popular place. Klek gets alive in mid June and most everything closes again in mid September. There is, however, a small supermarket open all year and one coffee bar is open during the weekends.
The picture shows Klek with the Peljesac Peninsular in the background - as seen from Smrdan Grad.