Dubrovnik and places along the road 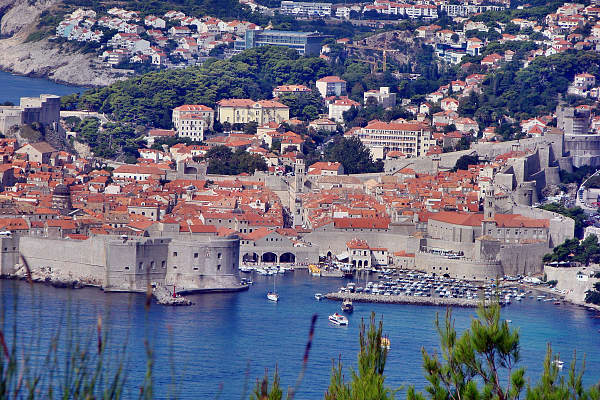 It is tempting to spend every day of your vacation on the beach. Even so, do allow yourself at least one excursion.


Dubrovnik is one of the first places admitted to United Nations UNESCO Heritage Site. The reason for appointing these is "Protecting natural and cultural properties of outstanding universal value against the threat of damage in a rapidly developing world", as the UN puts it.You must go! This old city is unique and a small wonder that it has survived.

The city can trace its origins back to the first Greek settlement in Cavtat (about 400 B.C.). When the Avar and Slavic tribes invaded in 614 the population moved from Cavtat to the present place where they could build a strong fortified city. The city was an important factor in the Mediterranean trade for centuries where it always retained some degree of independent through shifting rulers of the area. A bad earth quake on April 16 1667 destroyed much of the town and killed some 3000 people, half the population. After that it never fully recovered its former status. You do not have to be interested in history or architecture to enjoy Dubrovnik. Being a university town it is a "young city" with numerous concerts, theatre, opera, shops, markets and greater scores of seafood restaurants than you would expect to find in a 70.000 population small town carrying a thousand years of history with pride.


Organize your visit so it does not coincide with the major cruise ships. On this page: Dubrovnik Harbour Cruise Ship Plan on this page you can see ships presently docked. 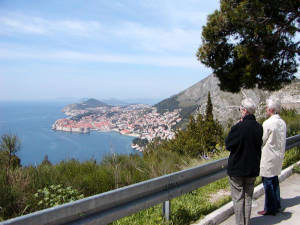 During the Balkan wars from 1991 to 1992 Dubrovnik was bombed from the surrounding hills and many houses and almost every roof was damaged. Luckily, the low caliber weapons used did not impact more than it was possible to restore everything. Standing on higher ground you will notice the  new red tiles on the roofs around the city. Those places are where the shells impacted.


We recommend that you visit Dubrovnik Online Travel Guide.

Suggested things to do:

Walk the town walls (must do!), visit the Dominican Monastery (near the Ploce Gate), and visit the Franciscan Monastery and the old pharmacy (near the Pile Gate). Visit Rectors Palace and - maybe the Nautical Museum - both are close to the old harbour.


If you have the time, the small evergreen Island of Lokrum is well worth a visit. It is just 10 minutes from Dubrovnik by boat. The Island has subtropical vegetation with beaches and wonderful footpath along lovely coves. There is a Benedictine monastery along a 10m deep small lake called the Dead Sea.

The fort (Srd) on the mountain above Dubrovnik is also worth a visit. The road up to it is narrow, but there is lay-bys that will enable cars to pass each other. Drive towards the airport 1.7 km and turn left towards Bosanka. From there it is 2.8 km to the fort. There is a good view from the big white cross, and try to drive to the back of the fort, go through the wall, turn right and maybe visit the exhibition for the homeland war and walk all the way round to the front where you have a fantastic view of the city. A more comfortable way to visit is now possible since the cable car opened in 2010. You get on the car not far from the Ploce Gate.

Parking in Dubrovnik: Be aware that parking is always a problem and that if you are lucky to find a parking space you must buy a ticket. It is 5 to 10 Kuna per hour and tickets (Parkirna Karta) are for sale in all the small kiosks that sell magazines and from the attendants at the regular big parking places. On the ticket, you must mark the current date and time and place it behind the windscreen of your car. There is one place near the Pile Gate where the cost is 20 Kuna per hour and because of this it is the most likely place to find a vacant space.
More information about parking and transport in Dubrovnik 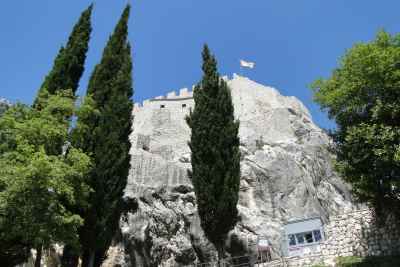 Just after the airport there are two places we recommend you to explore. Restaurant Konavoski Dvori and the area around it and the old fortress Sokol Grad. Both places are easy to find, because there are signs showing you the way.

Drive past the airport to the town Gruda and look out for the signs. Turn left and after a few km keep left for the restaurant or right for the fortress. GPS coordinates are on our GPS page.

At Konovoski Dvori, there are really good opportunities for walking along the small river, and the food is excellent. It is under same management as Proto and Nautika in Dubrovnik, and not so expensive. Try their lamb or veal baked under the iron bell. 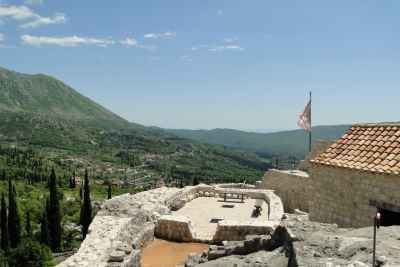 Sokol Grad is controlling the old caravan route to Bosnia and Monte Negro and has been a fortification since ancient times. In the 1400s, it was taken over by Dubrovnik and got its present shape. There was a small but efficient garrison here, and it was never conquered. It is believed to have been abandoned few years after the big earthquake in 1667 when Dubrovnik had many problems and were forced to concentrate on rebuilding their city. Over the years, local people used the fort as a stone quarry - as was customary - and used the stones for their houses. Now the fort has been very nicely restored and houses an interesting collection of artefacts that tell a story about life in the fort. Entrance fee is 40 Kuna (2014).

Sightseeing on the Way to or from Dubrovnik 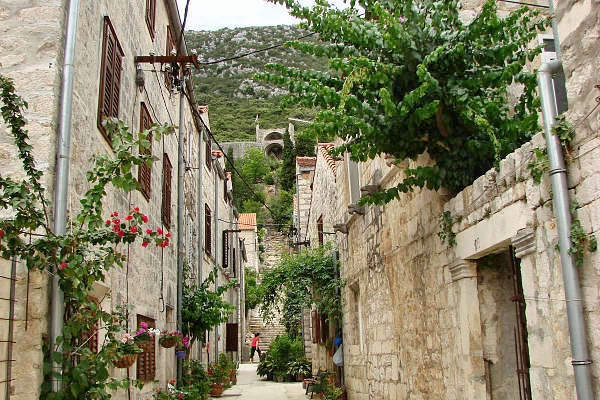 At the root of Peljesac Peninsular you find two small fortified towns. Both were build in the beginning of 1300's by the Republic of Dubrovnik. The length of the wall around them is about 5 km, and about twenty bastions have been preserved. It was built to protect the salt production which is still going on in the valley. Ston is a great place to start out if you want to walk on the walls. You can enter the wall around Ston from both ends and you can walk all the way to Mali Ston if you like (mali = small).

Look at the picture. Look down the street and up to the hill. The small thing 2/3 up is the main gate with walls on each side.

In Roman times Ston was called Stagnum and had an important strategic position. Veliko Kastio (Great Castle), which is a rectangular fortification, is one of the most impressive. It's recommended to start out early before it gets too hot. If you do this you can make it to Mali Ston in time for lunch by the seaside. There are a number of restaurants at the marina serving excellent seafood.

On the hill top in Ston is the Church of St. Michael, which together with the Church of Our Lady, Rector's Palace and the Franciscan monastery is the most valuable cultural monuments.

Ston has a very nice atmosphere and much the same qualities as Dubrovnik - it is just much smaller. 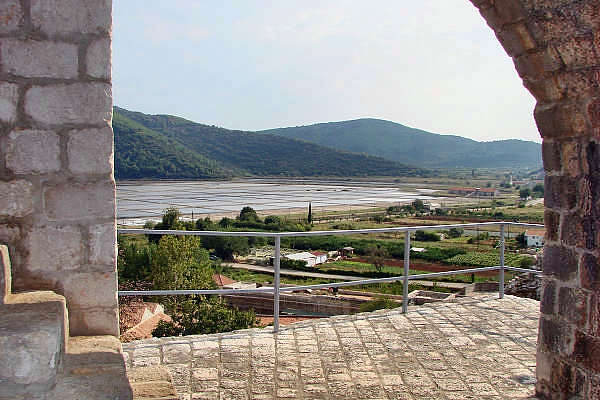 Stock up on refreshments at one of the cafes, tie your hiking boots and set off from ether end of the wall. From up there, you can enjoy (and marvel over) the reason these walls were built: The salty water basins down in the valley.

If you hike all the way from Ston to Mali Ston you might treat yourself to a taste of the local mussels and oysters that are farmed in the waters between Peljesac and the mainland. There are plenty of places to eat along the harbor front in this pleasant little town.

In the Bay of Mali Ston lies the largest clam farms in the eastern Adriatic. Oysters and mussels and other seafood from the Malostonski Bay are known worldwide. Around Ston and on the Peljesac Peninsular there are many opportunities for gastronomic experiences if you like mussels and wine. When you drive into the peninsular you will see many wine yards. Look out for signs that advertise or even better, ask for a guided tour where you have the opportunity to taste the specialities of the area. 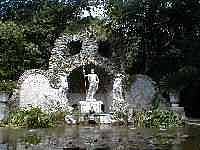 You can't miss the gardens when you drive through Trsteno about 20 kilometers North of Dubrovnik. The garden has more than 300 species of trees and numerous plants from around The Mediterranean and the world. Together with the architecture from the Gothic-Renaissance period this makes The Trsteno Arboretum one of the finest gardens in this part of Europe.

The botanical garden was founded in 1492 by the Gucetic-family who resided in the splendid 15th century summer residence in the centre of the garden until it was nationalized by the communists.

Being able to see the gardens today can be considered somewhat of a miracle. During the homeland war Serbian Navy ships and air planes shelled the gardens with phosphorus bombs on the 2. And 3. of November 1991. To this day, you can still see a few Mexican palm trees that live despite their outer trunks look like charcoal.

There is a splendid view from the bottom of the park. From the main road follow the signs for Camping and just keep going down. At the end of the road there is a small harbor and some abandoned houses. They are not abandoned because nobody wants them, but because it is difficult to establish ownership.

What about going by Napolen's Road back from Dubrovnik?

From Trsteno to Slano

In Trsteno - just after you have passed the Botanical Garden; turn right towards Majkovi. Follow this road and experience some great views of all the islands. At three points along the road, you may be in doubt:

If you are up to more you can keep on going straight ahead into the "Slano to Neum" description and continue from: "After 4-5 km keep left" - or you can turn left now and join the coastal road again.

From Slano to Neum 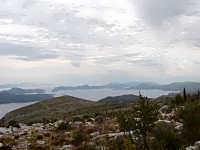 Now you get to the top of the mountain range with a good view. There is a new road coming up from around Doli here. In a junction with signs for Podimoc (to the rights) And Dubrovnik (to the left) you can turn left if you want to go back to the costal road through the village Doli.

If you continue through the junction you will meet another road on your left with a sign saying "Dubrovnik". Just before the road there is a new war memorial on your right. Both from the memorial and from the road there is a good view of the Bay of Ston and you can see the border station to Neum. I suggest you turn left and drive down to the border station here. You may continue, but there is not much to see, and if you meet a strict custom official when you reach the border to Neum, he may decide that you cannot enter because this is not an international border crossing.

Croatia holiday home sightseeing and activities from Medjugorje, Mostar and Sarajevo to Dubrovnik, Peljesac and Bosnia-Hercegovina.