A train journey to and from Sarajevo

The Capital of BiH

The Capital of Bosnia-Herzegovina and the Paris of the Balkan. The old centre was built under Austrian rule and is architecturally related to other central European cities such as Vienna.

Sarajevo is a treat in itself. Going there is a pleasant experience for the eyes as well. Going by rail or road you will pass through some of the most beautiful and varied landscape on the Balkans, and you can do it all on a day trip.

By Train to Sarajevo

Unfortunately the train no longer run from Ploce and Metkovic to Sarajevo in the morning, but you can cross the border and jump on the morning train in Capljina. Check train schedules here.

It is a fantastic journey with the railway planned and build by Austrian engineers during the Austria-Hungarian rule? 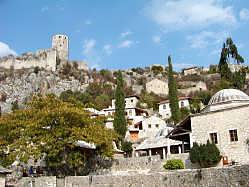 If you start in the early morning from Ploce or Metkovic, it is possible to return again late in the evening, and you will have had more than six hours to explore Sarajevo. You will be pleasantly surprised by how much has been rebuilt since the civil war in the 90s. Today the city and its people are thoroughly modern. However, it is unfortunately also now a city sharply divided into a Serb and a Croat/Bosnian part.

In the evening the train starts in Ploce, but it is most convenient to board it in Metkovic. In the morning you have to board it in Capljina. In the beginning the train follows the Neretva River and gives you a good impression of the fertile delta and the areas that have been left as a natural reserve. At Gabela, the old border town with Herzegovina the train starts a gradual and - at first - very modest climb up along the Neretva River. After 1.5 hour, you reach Mostar.

From Mostar, the scenery really starts to be impressive. The train rides on through the Naranta River valley with waterfalls and hydroelectric power plants, on to the Glogosnica Valley and to Jablanica that is famous for mountain climbing. If you come there by car, the delicious roast lamb that you can buy everywhere makes an unrivalled meal. Some of the roadside restaurants even use the water in the mountain streams to power the spears rotating with roasting lambs.

Then the train runs into Trascanica Valley, a wild and romantic countryside. After that it runs along the frontier between Bosnia and Herzegovina, which is also the watershed between the Black Sea and The Adriatic.

Finally, there is a steep slope where the train goes into two serpentine turns. It used to be a toothed rail, and the last 10 minutes go through suburbs into Sarajevo. 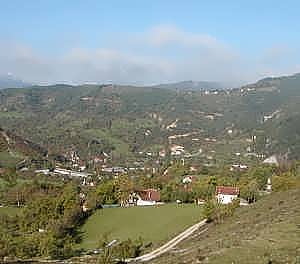 If you need to change money to the convertible BiH Mark, you may do so at the post office next to the railway station.
There are several places and museums worth visiting in Sarajevo. Please check this web page to plan your visit.

Take the tram (streetcar) outside the station and jump off in the centre. Be careful going back that you take a tram that will stop at the railway station. It used to be number 1.
The National Museeum is quite close to the station. It only takes 10 minutes to walk there, and it is really worth a visit. Especially, the archaeological part is very well-organized and interesting. Apart from archaeology, there is a natural history and an ethnological museum. To find the museum walk south-east following the tram tracks. At the first big road crossing at the technical school and the US consulate you will see the museum on the opposite side of the road. Do spend some time at the museum and rest in the beautiful botanical garden in the center.
From the museum there is 30 minutes brisk walk to the center, or jump on a tram.
There is a 45 minute fast walk from the center to the train station and don't rely on the trams. There are often problems late in the afternoon where everything stops. When that happens, all taxis are off course also occupied. Leave the center with plenty of spare time to enable you to walk - should there be problems.

Going to Sarajevo in the morning you can catch the train in Capljina in BiH. The railway staion is at the very end of the main road leading into and through Capljina


Please remember your passports as you are going to cross an international border on the way to Capljina.


The price of a train journey is quite reasonable. It almost makes you think about the "good old days" in the 70s where prices were way lower than in Western Europe, but also be prepared that it will not be a journey in luxury. The material is old and worn down, but acceptable. The trains can be very full Friday to Sunday.
If you make the journey off-season, please remember that Sarajevo is in the mountains (it was the seat of the Winter Olympics in 1984) and the weather can be much colder than it is at the coast.

Remember your passports as you are going to cross an international border.