The "wind cave" in Herzegovina 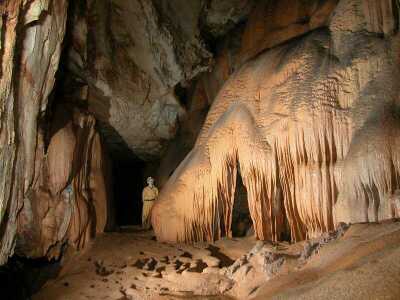 Vjetrenica Cave is the biggest cave complex in Herzegovina and will soon get status as a national park.
In the summer, there is a strong and cold wind blowing out of the entrance. The reason for this is unclear. The warmer the weather is the stronger the wind. In the middle ages, a local chief had a house at the entrance where he used the wind to keep his house cool.

The cave has been explored to a length of 2500 meters and has 6500 meters of galleries and canals. The main gallery is almost horizontal and about 600 meter long. It is open to the public and has a constructed foot patch and lightings.

From the cave flows a constant stream of water through a canal underground into the Trebisnjica River and from the far end it seems to flow in the other direction. The total length of the cave is unknown as the far end is blocked by a stone slide. An experiment was conducted here where a strong coloured substance was added to the water, and it surfaced on the Island of Sipan outside the cost north of Dubrovnik. If the cave really is that long it could account for the fact the a strong wind is blowing from it when there is a difference in air pressure at the coast and in the mountains.

Animals of the cave

Vjetrenica is a rich cave in term of subterranean bio diversity. More than two hundred different species are registered in the cave, and about 37 were discovered and described in Vjetrenica for the first time. 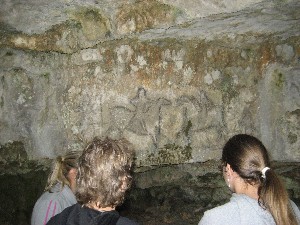 There has been found 85 animals (troglobionates) that have adapted to life in the cave. The most interesting is the olm, or the "human fish" as it is called. It can be 20–30 cm long, has four legs and both lungs and gills. It is a remarkable animal that can go for several years without eating, and it can be more than 100 years old. Average age that has been measures by French scientists is 65 years.

Bones of pre-historic animals have been found in the cave. Cave bear and a complete skeleton of a leopard. Human traces are mainly from the middle ages where there are characteristic paintings similar to those that can be seen on the old grave stones.

The cave is open to the public, but there are very few tourist who find their way to it. If you want to visit Vjetrenica Cave you are advised to call in advance to make sure that the guide will be there. And you may also just call when you are at the cave. The guide lives only few km away and will be happy to come and open the cave for you. Tickets are 8 Euro per adult (summer 2013). Bring a sweater or a jacket. The temperature in the cave is only 11 centi degrees, so it is cool in summer and warm in winter. And wear some good shoes. The path you walk on may be slippery from water..


The total driving distance is about 65 km from Komarna. On the slow route the last part of the road is quite narrow, but cars can pass each other. The fastest route has good roads except for 4-5 km which are narrow.

If you prefer an even better and more regular road you can access the caves from Metkovic and Caplinja via Stolac and then turn right for Ravno. The driving distance here is about 90 km.