Sightseeing information for areas in Hercegovina

Information about Mostar, Buna River and Blagaj, Medjugorje, Gabela, Pocitelj and Mogorjelo are on the Mostar and Around page.

Sightseeing suggestions on this page: 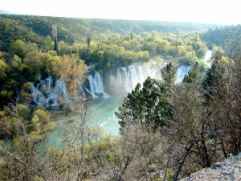 Kravica: The cold, clear water falls into a small valley. From noon onward (when the sun gets hot) some of the water particles hurdled into the air vaporize and put a lid of mist on top of the valley making it a pleasant shade-like feeling to be there.

Getting tired of relaxing on the sandy beach you can head out into the pool of water, which also has a sandy bottom. If you are up to it, you can swim across the pool (notice how the water gets colder), climb the rocks and jump. This is what the local teenagers do to impress one another - and perhaps the girls.

There is also restaurants where you can enjoy the view and relax by listening to the rumbling from the waterfalls. The entrance fee was 6 KM (3 Euro) in 2017 and is used to maintain the road, stairs and toilets. 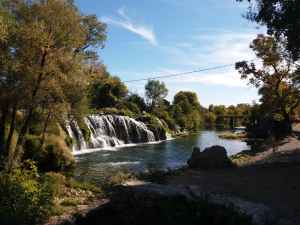 Kocusa: Close to Kravica (18 km) and on the same river is a small and charming waterfall with no entrance fee, picnic facilities and restaurants. The name of the river here is Mlade, but changes its name to Trebizat before it enters the Kravica falls.
Pec Mlini Valey: A few kilometers above Kocusa the Mlade River is called Tihaljina and it emerges from an underground river 18 km north west of Kocusa. The place where the spring emerges is channeled into a hydroelectric power plant. The valey is very beautiful so even if you can't see the spring it is worth a visit and you can visit an interesting big cave close to the spring. The cave is called Ravlica Petcina and it has been in use since since ancient times and up to Second World War where the Partisans used the cave as a refuge.

Driving directions to Kravica waterfalls - Remember your passport and insurance papers for the car:

Driving from Kocusa waterfalls to Pec Mlini and Ravlica cave

Komarna is the ideal place to stay if you want to pray in Medjugorje and also have the benefit of a beautiful scenery and The Adriatic Sea. 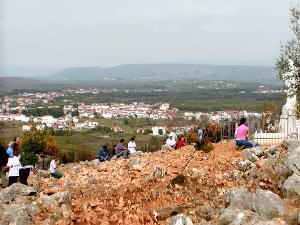 On June 24th 1981 a young woman bearing a child on her arm appeared on a hill outside Medjugorje. With her free hand, she urged six young people to come closer, but they did not dare to do so as they sensed something extraordinary. However, urged by a will they could not describe all of them came back the next day individually, and she revealed herself to be The Holy Virgin. Since 1981 more than 20 million pilgrims have visited Medjugorje. It makes it one of the biggest Catholic pilgrim places along side Lourdes in France.

When you are in the Medjugorje area you should visit Etno Selo for a drink or a meal. It is a very nice area where a typical Bosnian village has been recreated for tourists. It has a good restaurant, souvenir shops in the stone houses, a farm area and a church.

- From Metkovic, continue towards Mostar

- Turn left towards Capljina where you cross the river
- Continue towards Ljubuski
- Follow the signs from here
Remember your passport and insurance papers for the car.

Driving from Medugorje to Etno Selo

From the big church in the center go north about 400 meter
Turn left on Franje Tudmana and drive 1.8 km
Take 3. exit in roundabout and follow road 425a 1.3 km
Look for a small sign and turn left into what looks like an industrial area
Etno Selo is 400 meter down the road on your left 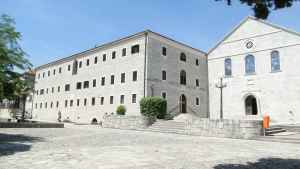 Humac is about 5 km south-west of Ljubuski, and now almost part of the suburbs of Ljubuski.In the Fransican monestary in Humac there is an interesting and modern museum. Well worth a visit.

The area of Gracine in Humac is on a plateau between the left bank of the river Trebizat to the south and Humac to the north. The Roman military camp was built on level and well-drained land. About 450 m to the south of the camp is a bridge over the Trebizat River. There was probably a bridge here in ancient times too. The site is bounded on three sides by local roads and to the north-west by the Vrgorac-Ljubuski road. The role of the military camp was to protect the main Roman site of Narona during the war with the Dalmatians at the time of Augustus' campaigns in 35 to 33 BC.

Remember your passport and insurance papers for the car. 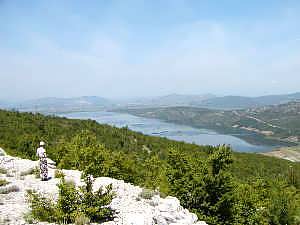 Hutovo Blato is a hunting resort for water birds and the largest winter resort for the birds in Southern Europe. 200 species of birds find sanctuary here during the winter. It is a nice and interesting trip through Herzegovina and easy to find if you start in Neum.

Turn left in the T-junction in Neum and follow road number 17.3 towards Hutovo and Capljina. On this road you pass directly through a ruin that is a close relative of Kula Norinska. The, fortress was used by the Ottoman Empire to control the strategic mountain pass and the trade routes from the cost to mainland Bosnia. During the 1991 war, the Croatian army also held this pass and prevented the Serbian Army from reaching the coast. Do not walk away from the roads in this area. Nobody seems to be absolutely sure that the place has been cleared of land mines.

After the ruins, you drive down to Hutovo. About 6 km after Hutovo the road divides towards Stolac and Capljina. Follow the road towards Capljina. The road to Stolac is a bit of a challenge, but it does run through some very interesting landscape.

The road towards Capljina will take you to a point where there is a very nice view of Hutovo Blato. When you stand where the picture was taken there are some concrete constructions behind you. They are part of a hydro electric plant. Below you in the rock there are some huge turbines in 90 meters tall shafts. 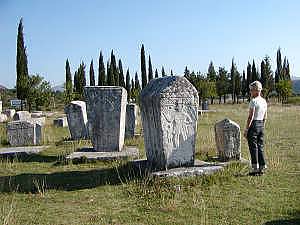 The burial ground is on the road between Capljina and Stolac (turn right towards Stolac 9 km from Metkovic). The road follows the Bregava River where Cro-Magnon man lived 13000 years ago. Stone tools and bones have been found in Badanj Cave (Spilja Badanj) together with some engravings outlining a horse and other signs like arrows. Unfortunately, the cave is not accessible.

About 20 km down the road in the area of Vidovo Polje and on the right side of the road 3 km before Stolac there is a large burial ground with "stecaks" (old tombstones) from the early Middle Ages. 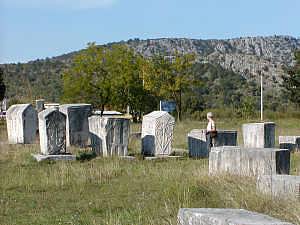 It is probably the best preserved monuments in this part of the world. The area is not in a good shape, but has been declared a national monument and there is hope that the government will stop the pollution and destruction. If not - go and see it before it disappears. The stones and the engravings are very interesting.
In 2011 the stones were cleaned and now look like they probably did when they were raised in memory of deceased 1000 years ago. It isn't necessarily an improvement. The reliefs are more difficult to see now, and we preferred them the way they were before.
Standing on the Necropolis and looking north towards the hills you are almost able to see the remains of the old Hellenistic town of Daorson. 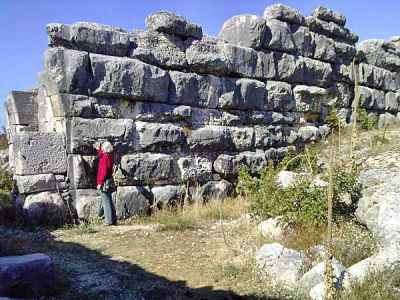 Daorson was the home of the Illyrian tribe of the same name. It goes back to the Iron Age and was inhabited from the start of the early Bronze Age (17. to 16. Century BC). There were massive town walls with very large stone blocks and two great arched entrances that are now ruined. At the back, against the cliff there is a so-called Acropolis. The Romans conquered and destroyed this culture in the second century BC, but used the town as an outpost for Narona until the Avar tribes conquered it and destroyed it in the 800s.

The remains of the walls are very impressive and show that the Daorsi people had great building skills. Some of the stone blocks are bigger than those used for the Egyptian pyramids, and they are fitted perfectly together.


It is possible to get to the ruins if you don't mind serpentine (hairpin), narrow roads and dirt roads.

Just before the ruins you pass a picnic place with a fantastic view and like in Radimlja - a lot of garbage that nobody seems to care about. You cannot drive all the way to the ruins and will have to walk the last 200 meters.
A large area around the present ruins was residential and commercial areas, and the site has never been properly excavated.