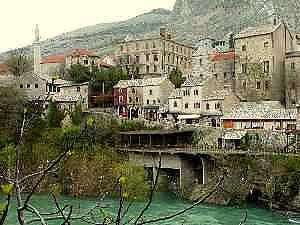 Mostar is a great historic city. Visit the tourist office for information. There is a big market every Saturday where you are sure to find a bargain.

Mostar is the former oriental trading centre of Hercegovina. Today Mostar is again a bustling place, with a fascinating history and a wonderful architecture.

The city is only about 75 km. away on the road through Metkovic towards Sarajevo. It is an easy drive. Much easier than the winding coastal road. The city used to be a real pearl of multi-ethnic architecture and culture. During the civil war in 1993, it was destroyed in the senseless hatred that broke out between groups of the local population, and it is still marked by the battles that were fought across the Neretva River. The left bank is now Bosnian Muslim and the Right Bank is Croatian Catholic.

Funds have been allocated to the city by many agencies, and every time we visit, we are pleasantly surprised to find that restoration work is in good progress. There are still many houses that are destroyed or severely marked by the fighting, but the centre around the old bridge (Stari Most) is now very busy with cafes and souvenir shops and a lot of tourists - even off season. 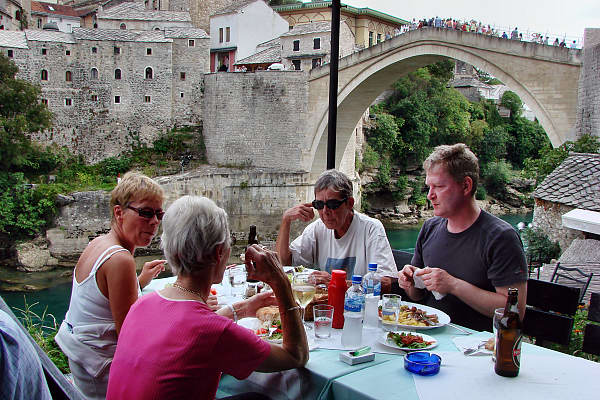 The old bridge over Neretva River is the symbol of the city. It dates back to the time of the Turkish occupation in the 1400's. The war destroyed it and the nearby buildings in the old town. One of the encouraging things is, that the bridge is now rebuilt and opened on July 23. 2004. It is again a very attractive site, and something to remember.

The whole area around the bridge is interesting and beautiful and seems to be coming back to its former shape so that we are again able to enjoy the multi-cultural atmosphere and tranquillity.

The city needs tourist. Visitors are very welcome and maybe the best (and only) thing we can do is to show up, spend some money, and pray that everything will one day be as it used to be.

If you want to go to Mostar, take the road from Metkovic towards Sarajevo. When you get close to Mostar, look out for the airport (on the right) and follow the road to the left towards the centre a few kilometres after the airport. Look out for signs pointing to the right towards "Stari Grad" (old city) or "Stari Most" (old bridge). You will be rewarded with impressions that - for good and bad - will stay with you forever.

Sights on the road to Mostar

Remember your passport and insurance papers for the car. 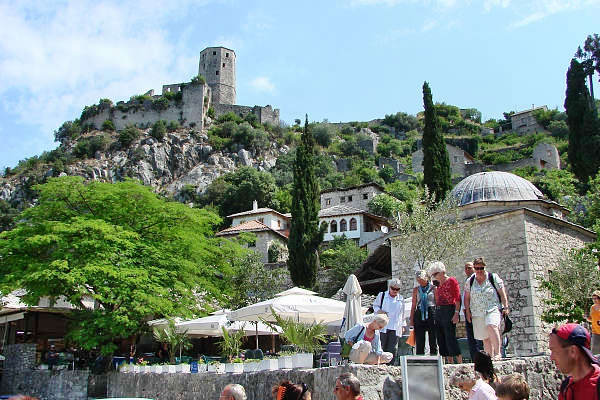 14 km from Metkovic. Turkish settlement with many buildings left including mosque, madrasa (school) and a haman (bath).

High up over the river is a fortress build by King Tvrtko In 1383. It played a strategic role by controlling the Neretva Valley. The town was severely damaged during the civil war, but restoration work is progressing and the mosque and some old houses have been nicely restored. The village is a good place to rest and have a cup of coffee in one of the cafes on the central square.

You can walk to the fortress and with a bit of agility you can climb the stairs inside the tower and take in the surroundings through the arching holes.

Half way between Pocitelj and Buna there is a newly renovated monastery. The signs are only visible when coming from Mostar, but it is easy to spot on the right side of the road and about 100 meters up a small road.

The monastery and church are Serbian orthodox and a representative of the third ethnic group that used to be in this area, but, which was more or less forced in exile during the homeland war in 1992. 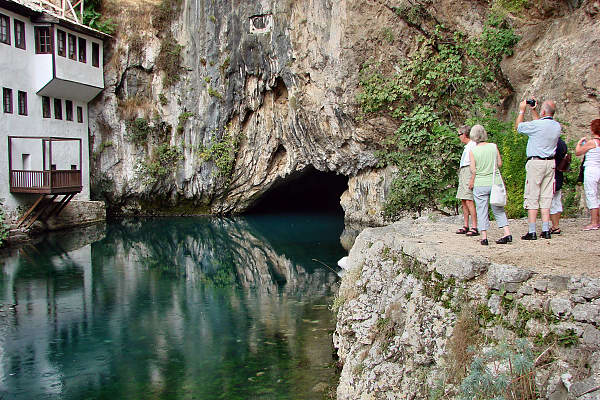 Blagaj's highlights is the Buna Spring and the adjacent Ottoman house and monastery called the Dervish House. The Dervish is an ascetic sect in islam best known for going into trance by dancing spinning round and round. There are still Dervish people practicing in Bosnia Herzegovina, as well as in Turkey and The Middle East.

The spring is amazing. It flows out of the bottom of a 200m high cliff wall with 43.000 liters per second and creates the Buna River. The Ottoman sultan was impressed, and ordered a tekija to be built right next to it. This 16th century house/monastery was built for the Dervish cults and is still one of the most mystical places in all of Bosnia and Herzegovina.

A newly built heritage trail around the town is a rather pleasant 30-45 minute walk around the town starting at the Tekija Dervish House and visiting the Velagic house built in 17th century a beautiful example of Ottoman stone masonry. In the vicinity are also old flour mills that the strong Buna powered. On the way to Blagaj try to visit a wonderful hidden restaurant that you may find if you follow the driving instructions and not the road signs. 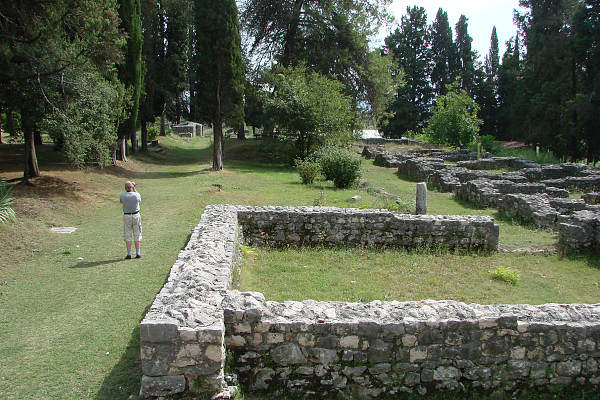 A trip across the border in Metkovic can take you to several interesting places just inside Hercegovina. The closest places are two old fortifications that you may read more about in the document "Historic Excursions".

Gabela, Four km from Metkovic, was the gate to Neretva after the fall of Narona in the 600s. We highly recommend the place if you like fortifications.

Mogorjelo, Roman villa rustica (large industrial-like farm) from the 200th's. At 102x 86 meters its a fairly large ruin. The villa rustica had close links to Narona to whom it was a major supplier of produce. The site was excavated more than a hundred years ago and is now a beautiful park lined with shady trees that were planted back then.

Now imagine that this could be ancient Troy. Many believe it is and the surrounding landscape does fit the description in the Iliad.

There is more information about Gabela and Mogorjelo in Historic Excursions.

Page with coordinates for GPS and maps.