The Neretva Valley is an area where tribes, nations and their armies have fought for dominance since the beginning of time. The trade routes have gone through Neretva Valley since prehistoric time. Those who controlled the valley and its many robbers and pirates could control the trade for all of the present day Bosnia-Herzegovina.

Neretva River emerges beneath Zelengora Mountain in eastern Bosnia-Herzegovina. Through canyons, cliffs and hollows in its upper and middle courses, it forces its way through the Dinaric Alps to spread downstream of the village of Pocitelj in Hercegovina over a vast wetland valley and to flow through its large delta into the Adriatic Sea.

Neretva is the largest river of the eastern part of the Adriatic Basin. It is controlled to a large extent by several hydroelectric power-plants and their storage lakes, but it still remains unique in its beauty and the diversity of its landscape. 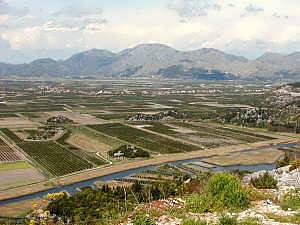 The Lower Neretva valley contains the largest and the most valuable remnants of the Mediterranean wetlands on the eastern Adriatic coast. Very few areas of this kind still remain in Europe.

The valley has a rich monumental heritage witnessing the presence of man in this area for thousands of years. Turning of wetland into fertile land and establishment of transportation routes to the hinterland created the conditions for the development of settlements. Many prehistoric fortifications and settlements are scattered on high and low grounds along the Neretva River. This area seems to have been inhabited by Illyrian tribes as far back as in the Iron Age. In the 4th century B.C., the Greeks founded an emporium (port) here, which developed into the well known market town Narona, today the Village Vid near Metkovic. All over the delta around Narona, there were suburbs and estates the remnants of which are now covered by the marsh and deposited sediments. Many monuments from the Roman time are present, too, such as city walls with towers, Roman villas, mosaics, epitaphs.

The medieval monuments are few. During the Turkish invasion at the end of the 1400's, several churches were destroyed and the memory of those times is kept alive by the fortress Norinska Kula situated at the mouth of the small Norin River into the Neretva River. Due to frequent wars in this area, no significant monuments from the time of the City/State of Venice have been left. 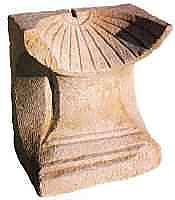 Narona just outside Metkovic was a Greek settlement first mentioned by the Greek historian Theopompus (Historian for Alexander The Great) in the fourth century BC. The town continued to be one of the most important in the area. It was eventually promoted to the rank of colony under the Romans that used Narona as a base for attacks on rebel states and on those pirates' nests that the island-dotted waters always fostered.

The town's importance grew even further once rebels and bandits had been eradicated. It became the regions business centre. Its status lasted until the sixth century where it began to decline to be completely abandoned in the mid seventh century.

Excavation and restoration is still going on and much needs to be done so do not expect to see the likes of Rome. Keeping this in mind a stroll through the Forum and along the remains of the once magnificent defensive walls is a nice break from lying around getting grilled on the beach.

The new Museum Narona is now open. 2007. Many of the artefacts found in Narona are exhibited and the small modern museum is well worth a visit.
Read more about archeological and architectural aspects of Narona.

In the Village of Vid you can see various Roman stone carvings which have been used to build the modern day houses in the village.

The right bank of Neretva River

Cross the river in Metkovic (towards Ljubuski). Turn left in the roundabout and turn right at the first crossroad. There are several small villages on this road and many, many remains from the earliest civilisations here. Unfortunately - as everywhere else - very little has been done to point our attention to it and you will have to look carefully for yourself. On the other hand, it makes it a bit of an adventure and if you happen to meet one of the "locals" do try to talk to them and if you are lucky and they speak a foreign language you may be treated to very interesting stories. 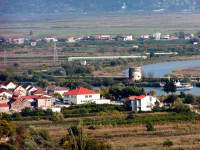 Turn right towards Desne. This settlement has almost ceased to exist although it is among the oldest in the area. There are numerous remains from ancient times. Have a look around the church of Our Lady of Carmen (1865). Below the church are the abandoned village of Bagalovici and remains of ancient civilisations and cultural-historic monuments along with Illyrian stone burial mounds. They can be difficult to find.

The village was a pirate stronghold for many years and a constant nuisance to rulers of the area from the Greeks before BC to the Venetian in the 1600s. The road continues through Desne and eventually joins with the other (main) road out of Kula Norinska that would have taken you through the village of Komin.

About 6 km from Metkovic. This village is where Napoleon's Road meets the delta and where it crossed The Neretva River. It was the final frontier against the Ottoman Empire. The tower Norinska Kula (now on the other bank of the river) was build by the Turks in the 1500's as defence against Venice and to protect the waterways of Norin and Neretva River. The Turks held the Norin tower until 1685 when they lost it to the Venetians. After the fall of the Venetian Republic the tower fell into the hands of the Austrian army and later the French army. 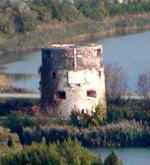 The Norinska Tower close to the Metkovic-Opuzen road was build by the Turks around in the beginning of the 16th. century. The tower was where the River Norin met the River Neretva. The purpose was to keep the Venetians away from the valley and to have a stronghold where the Turkish possessions in Bosnia Herzegovina could be defended from. The Turks did not quite succeed. Already in 1685 the Turks had to give in to a Venetian army supported by local people and leave the tower.

But with the towers strategic importance the Turks wanted it back. And they got it. Several times in fact. During the next centuries the Venetians and the Turks succeeded one another in being masters in the tower. This rivalry came to an end when Austrian (Habsburg) troops kicked both of them out.

Under Austrian rule the river altered its course and the tower lost its strategic importance and was abandoned. 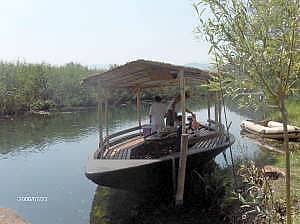 Photo Safari in the Neretva Delta

The travel agents Atlas and Narona Tours and the Hotel Villa Neretva organize photo safaris in the delta in July and August. The guests travel in original Neretva boats through the swamps of the delta and the journey ends up at Villa Neretva at a rich table of specialities from the river and with good wines.

See page with coordinates for GPS and maps

Croatia holiday home sightseeing and activities from Medjugorje, Mostar and Sarajevo to Dubrovnik, Peljesac and Bosnia-Herzegoviva.